I'm a Scientist: Supported by Wellcome
Skip to content 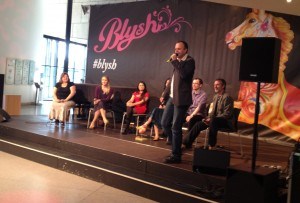 We like to experiment with the I’m a Scientist brand. In the last 12 months we have adapted the site to accommodate unlimited number of scientists in a zone, we’ve run In the Zone across a 12 week period and opened it up to the general public with the GM Food zone. Yesterday show another variation when we took the show live in front of an audience.

Thanks to the boundless energy and eternal optimism of Rhys Phillips a former IAS participant we agreed to let him use the format for the Cardiff Science Festival. Sunday 15th July 2012 at 5pm on the Glanfa stage in the foyer of the Wales Millenium Centre was scheduled.

A quick email out to scientists who had applied to take part in IAS resulted in 6 scientists volunteering to take part. Dr Mark Lewney was roped into MC’ing the session.

We were given a quiet room on the 2nd floor to brief the contestants. No-one had any idea what to expect when we finally took to the stage. We were developing the format on the hoof. The event was free and ticketless so we didn’t know if we’d have an audience. The Cardiff Mela happening outside had brought crowds to Cardiff Bay but I didn’t expect much cross-over between I’m a Scientist and the Trance Dance act that was onstage just before us.

Once briefed we took a peek over the balcony and it was very exciting to see that the seats were all full of people waiting for I’m a Scientist to start. There were about 75 people there at the beginning and throughout people stopped by to listen for while. Some stayed some moved on.

After a short wait for the sound crew to set up mics for everyone, Mark took to the stage to warm up the crowd.

He explained that the audience were going to get the chance to hear from our six scientists, ask them questions and vote for a winner.

That done the scientists were introduced:

Each scientist had two minutes to introduce themselves and their work. Most didn’t use the full time and allowed us to move on to the next stage. The scientists had been asked to bring two facts about their work (or themselves), but one had to be a lie. This round of Science Fact or Science Fiction (thanks John) asked the audience to guess which was which and worked very well as a simple warm up before the Q&A session.

The audience had all been given voting cards with the initial of each of the contestants on. They were asked to hold up a card to indicate to whom they wanted to ask a question. Mark dived into the audience with his roving mic and in turn each scientist was asked a question and along with the others had the chance to impress with their answer.  We started with a question about whether a truck carrying birds would weigh less if the birds were flying or perched inside.  The questions came from a mixture of adults and children and covered a wide variety of subjects. Having a good sound system is vital to make this work.

With 10 minutes to go before the end Mark called for the audience to vote for the scientists they wanted to  win. A show of cards worked remarkably well and after some careful consideration we were left with Ceri and Martin to battle it out for the final set of votes.

A quick plea for votes followed by a couple more questions and a final vote led to Martin being crowned the IAS Live Champion for Cardiff.  He made off with a nice bottle of Champagne whilst Ceri made do with Prosecco.

The other four went home empty-handed but were very complimentary in their feedback. They enjoyed taking part and the voting off was not a problem.

Members of the audience asked follow-up questions of some scientists afterwards and there seemed to be a generally positive buzz from the audience. We surveyed a small biased sample (my cynical family) and they all thought it was very good and that the scientists came across well.

However we got the key ingredients right. An excellent, energetic and flexible MC to whom the crowd can warm. A group of articulate scientists with a strong desire to talk about their work. A simple format that people can understand. A passing audience willing to listen in and ask a few questions.

I think the event would work again at a science festival like Cardiff. It would work whereever a crowd with an interest in science could be found. The scientists could cover a broad range of disciplines as in Cardiff or we could bring together some specialists in a certain field. It’s got great potential.

One Response to I’m a Scientist Live – evaluation