Joanna Buckley describes taking part in IAS, and what she did with her prize money…

Joanna Buckley, winner of the Nitrogen Zone in June 2010, has written about taking part in I’m a Scientist. Have a read to find out what being an IAS scientist is really like, and to see what Jo did with her prize money.

It only seems a few weeks since I was gearing up for ‘I’m a Scientist. Get me out of here’ in the summer of 2010. I was relatively new to Twitter at that time and joined, probably like most, because I wanted to be all hip and groovy like Stephen Fry. It was there that I heard about IAS and quickly signed up.

After the scientists were chosen, it became apparent that there were four of us from the University of York taking part. We met up, talked tactics and became really good pals. The York Mafia, as was affectionately coined on Twitter, were united. It was a comfort to air our anxieties within our quartet as we ploughed on into the unknown. 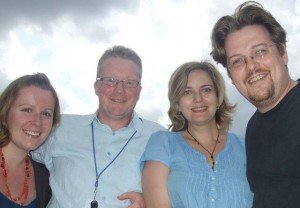 The event started and it was a bit of a slow burner in the Nitrogen zone, to be honest. Don’t be surprised if you find other zones wading through dozens of questions on the first day and you’re there wondering if you’ve logged in correctly. On the second day, the questions came. Slowly at first and fairly conventional; who’s your biggest inspiration? what’s the best thing you’ve discovered? what’s your favourite experiment? This was my first mistake. I answered these questions in far too much detail. Cue flashbacks to my English school report where every year I was told I needed to be more concise. Useless twaddle is my speciality. If I see a box on a form, I’ll bloody well make sure I fill it. All of it. Or if someone asks me something, I’ll only stop when they start talking again. See, I’m even doing it now. The problem was, after receiving about 10 questions at first and having a whole evening to answer them, I made sure I filled those damn boxes. The World Cup was in full swing during IAS 2010. It meant I could come home after work and feel that I wasn’t ignoring my boyfriend. It was probably a blessing for him too to be honest, as he could watch the footy in peace whilst I had one eye on the ball and the other on whether the moon landings were faked.

The day after, I had my first live chat. Nothing prepares you for the intensity. My second mistake was not being particularly good at typing quickly.  At first, I was carefully spelling the student’s names to answer their questions and missing the vast majority of dialogue. In subsequent chats, my fingers were on fire. I cut down my responses but nippy typing comes with a downside. Spelling. But no one seemed to care that ‘possible’ often became ‘pissible’.

It’s after the live chats that you’ll get a barrage of questions from the students who didn’t get their questions answered. Generally, these were extremely intellectual and thought provoking and were a joy to answer. I quickly learnt that in order to get through them all, I had to cut down my responses. You can’t tell if your fellow scientists have answered before you and at first, I felt like a right wally, essentially repeating what had been said for the fifth time [This has now been changed so scientists can read answers written before them, Ed]. At the start of the process, I was invariably the last to answer so I needed a plan. I like making people laugh. I’ve been told I’m actually quite good at it so I reverted back to being the class clown. Hey, it worked for me back then. 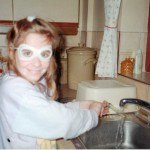 My first foray into chemistry- Christmas Day morning, 1990, cooling a test tube down in the kitchen sink. Health and Safety would’ve had a field day (that test tube bung is destined for my face).

Work was hectic during the couple of weeks of IAS, as I’m sure it’ll be for you. I delivered a talk at a conference at Sheffield Hallam University’s Owen Building. I had two live chats scheduled back to back that morning, finishing 5 minutes before my session was due to start. I did what anyone would do. I made friends with a random man and took over his office for 2 hours. I can’t recall his name but if he ever stumbles across this, you, Sir, are a beautiful man. The Owen Building is a maze. It’s the sort of place you’d still get lost after working there for years. There are 12 floors and ground level is on floor 5. How does that work?! These people have clearly not considered fools like me. After a strange mix of lifts and stairs and after hoofing it down a long corridor, I found my room and delivered my talk. Be prepared for mad things like this and concoct some good excuses if needed.

You could just tell that the second week of IAS was more intense due to the impending evictions and after more live chats and hundreds of fantastic questions, I’d made it to the final two. It obviously hadn’t mattered I was sometimes the last to answer the questions so don’t worry if you feel like this. I was driving when the final results were announced. As the clock ticked past 15.30, I pulled over and found out the good news and celebrated with an upper body victory dance. We’ve all done one.

I wanted to use the prize money to support schools but that’s not as easy as it sounds. How do you go about choosing who gets what? I think I was a bit naive when I thought about how I’d spend the winnings. To be brutally honest, I didn’t expect to win. I’d seriously recommend giving this question the most thought on your profiles. So instead, I’ve invested the money in equipment I use when I’m giving workshops and lectures in schools. I’ve got some money left over and I’m using it to build up a resource website. I’ve had a weekly science radio show on BBC Radio York for the past 18 months and I’d like to make the audio files freely available to students and teachers. I know they’re useful as I’ve spoken to teachers who listen every week and plan activities around them.

Taking part in IAS was amazing. I’ve met some inspirational scientists, not just from York, and some ‘epic’ students. Their word, not mine. I hope you enjoy IAS as much as I did. We’re hoping to plan a bit of an informal get together in the North once the event in March has finished. I’ll keep you posted.

The York Mafia still meet up every month over coffee. It’s a bit like therapy. If you’re ever close to York, get in touch with me on Twitter @joannabuckley and we’ll all meet up.

And, as you can probably tell, I’m still one of life’s wafflers.

5 Responses to My flat-out fortnight