What Jon Copley did with his prize money… 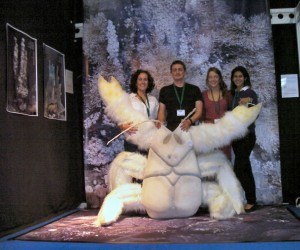 Originally, I planned to send live videos from our research ship to schools, so that students could take part in our expeditions, see what we are discovering on the ocean floor, chat to our team, and even sometimes direct our operations to explore the deep sea for themselves.

To fulfill our dream of a live video link with schools, we now need our own satellite communications system, which would cost around £25000 per expedition. I haven’t given up on that plan and although I can’t yet bring students to the ocean floor via the internet, I can bring the ocean floor to the students. So using the IAS prize money and sponsorship from a company, my PhD students and I have created an exhibit called “Where no-one has stood before”.

Our exhibit recreates what you would see, at life-size scale, if you were able to walk around on the seafloor at a deep-sea volcanic vent, 2400 metres beneath the waves. The exhibit includes a life-size banner image of a volcanic vent “chimney”, which is five metres tall and covered with deep-sea creatures. We’ve also recreated an area of seafloor around it, which shows what you would see underfoot if you were standing there: the rocky lava of the seafloor, and the animals living on it, such as Antarctic “yeti” crabs, stalked barnacles, and giant anemones. All of the animals that you can see in the exhibit are new species – most of them haven’t been properly described and named yet.

The view that you get from the exhibit is actually better than what you can see from our underwater vehicles that dive to the vents. From our vehicles, we only see a small part of the landscape at any one time – but for the exhibit, we’ve stitched together hundreds of pictures to show what it would be like if you could look around freely. Most of the time, the exhibit will be at the National Oceanography Centre in Southampton, where we regularly have school groups visiting. I often talk to those visiting groups about the marine life at deep-sea vents, and now I can take them there as well. But we can also take the exhibit out to schools (if they have a space tall enough for it!), and put it up in places like shopping centres during events such as Science Week.

In the future, I hope to build on the exhibit – we have enough pictures to recreate several vent chimneys at life-size, and an area of seafloor the size of a sports hall. I’d really like to fill a space like an art gallery with the exhibit, and then invite people to come for a walk around deep-sea vents on the ocean floor. Companies are starting to mine deep-sea vents for the minerals that they contain (such as gold, copper, and zinc), which could harm the creatures that live around them. Most people don’t know about the animals that thrive at the vents, and so we also hope our exhibit may help to raise awareness about this issue.

Right now I’m at sea again, this time heading for deep-sea vents in the Indian Ocean, where China plans to start mining. We don’t yet know what animals live at these Indian Ocean vents – and that’s what I hope to find out in the next couple of weeks, and share with schools via our www.thesearethevoyages.net website.

Posted on February 10, 2012 by in News, Winner report. Tagged prizemoney. Comments Off on What Jon Copley did with his prize money…