What Andrew Maynard did with his prize money… 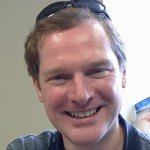 I love books – the old fashioned kind, printed with ink on paper.  As a kid, books were my source of education, inspiration and entertainment.  As an adult, I still find there’s something oddly satisfying about picking up a sheaf of printed and bound pages and immersing myself in them.

So it’s perhaps not surprising that, when it came to using my prize money from I’m A Scientist, get Me Out Of Here, I ended up turning to books.

Knowing how to use the £500 prize for being the last scientist standing in the Silicon zone on I’m A Scientist was something of a challenge in itself.  The rules of the competition stated that “The money must be for publicising or communicating the scientist’s research (or research area).” It sounds simple. But £500 lies in that awkward region where it’s too little to do something really big with, but too much to just fritter away.  I suspect the organizers in their wisdom realized this – it’s a sum that forces you to think creatively!

And there was certainly some creative thinking amongst the scientists taking part in I’m A Scientist.  Tom Hartley (runner up in the Imaging zone) came up with the great idea of scanning a teacher using fMRI (an idea he’s still pursuing) for instance, while Stephen Curry – the winner of the Imaging zone – has plans for a follow-up to his “What Science Is Really Like” movie trailer.

But I really struggled with this.  I toyed with the idea of buying an iPad (“I’m sure it’ll get used for communicating science someday…”), or covering the costs of running 2020 Science (a little more legitimate maybe, but hardly creative).  In the end though, it was my love of books that won out. 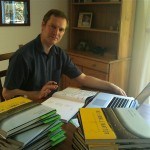 So the £500 is going toward sending each class that participated in the Silicon zone of I’m A Scientist a copy of a book.  And not any old book – each class is getting a copy of Felice Frankel and George Whitesides’ No Small Matter: Science on the Nanoscale.

The beauty of sending each class a science-related book is that it’s a long term investment.  Hopefully the students that took part in I’m A Scientist will get a kick out of it.  But then, the book will (hopefully) find it’s way to the class or the school library – where it will be a source of inspiration for future generations.

Okay so maybe fewer and fewer kids pick up books these days and read them.  But it’s still easier to flick through an attractive book that is within arms reach than stumble across it while browsing online.

And this is an attractive book.  Not just because it has high production values and contains some great photos, but also because it irresistibly draws the reader in as they browse through it.

What I love about Frankel and Whitesides’ book is that it isn’t patronizing and it doesn’t set out to instruct.  Rather, it opens a window into what it’s like to see the world as a scientist.  This – together with the beautifully written short essays and gorgeous pictures – makes it accessible and engaging to almost anyone who starts looking through it I suspect – whether they are into science or not.

I do hope the students enjoy the book.  And I hope it inspires them – not to become scientists necessarily, but to see and appreciate the world in a different way.

And of course, there’s always the possibility that they will come to appreciate that the printed page isn’t obsolete – quite yet!

Posted on August 11, 2010 by Moderator - Sophia in News. Comments Off on What Andrew Maynard did with his prize money…